Many students across multiple centers of National Academy of Event Management and Development (NAEMD) are getting duped every year for the past 8 years.

In a shocking turn of events, the lives of many, many students across India are hanging by a fine string. Some students themselves and the relatives of some others did some digging and unearthed the ugly truth.

In Mumbai, NAEMD claims that they are providing Mumbai University courses, while what they have is simply a collaboration with Garware Institute of Career Education & Development (GICED). The former do not AICTCE or DTE approvals, hence, is not recognized to impart educational degrees. Additionally, GICED is not even in the UGC list, making all their degrees invalid. Students, if you have a GICED certification for NAEMD, not this: any degree or diploma certificate of a body or university not approved by the UGC is not a valid degree or diploma certificate.

In Ahmedabad, NAEMD claims to have tied-up with the Swarnim University. They also claimed they are an official college. Shockingly, the Government Gazette reports that Swarnim university was formed only to give courses in Sports and Physical Education. How then is NAEMD offering courses on Event Management and PR? The first RTI inquiry against them revealed that:

a) Swarnim University had not given them MBA courses. But they advertised saying that it did and many students applied for it. They were informed much later that NAEMD is not offering the MBA.

b) NAEMD’S application for the affiliation was then under process and not approved.

c) A second RTI further unveiled that their BBA application was under consideration, but since May 2018 they had admitted many students for the unapproved programme, collected their fees and started teaching them as well.

d) Swarnim University does not even offer degrees in Event Management and PR.

e) A third RTI received in early January, revealed that they had received a conditional, temporary one-year affiliation that was valid only till April 2019, risking the careers of the students admitted in May or June 2018. They also admitted BBA students for the 3-year course for the duration that began after the temporary affiliation was over. 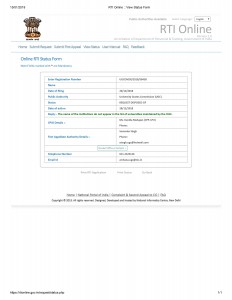 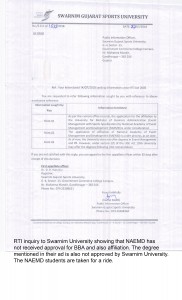 In reply to yet another RTI, Swarnim University states that the degree is a “BBA” in Event Management with Sports Specialisation”. Although they call it a degree with “sports specialisation”, a look at their course of 30 subjects reveals only one subject of sports. By no standards is this a specialisation, then.

In Jaipur, they are tied up with a private university called Vivekananda Global University, which also does not have a UGC approval. They are also offering some of their student’s invalid degrees from the Bharathiar University Coimbatore.

In New Delhi, they are conducting only diplomas. But, on their website, they claim that they are affiliated and are a college.

At all their centers across India, their second year MBA and BBA students are still being offered degrees from Bharathiar University, Coimbatore. The UGC has declared all these degree invalid. However, they have continued to give degrees from 2009 to 2017 at all their centers. NAEMD has given fake degrees to thousands of their students in the past 8 years.

There are some criteria to be known as a college:

If you know any NAEMD student, share them this video https://youtu.be/wW24iAgRapY so that they can hope not to lose more years of their life. It’s time the government took severe action and punished all this responsible for this scam.

EducationKnowHow provides you with the best training blogs to give you some meaningful insights into the real-life corporate scenarios.